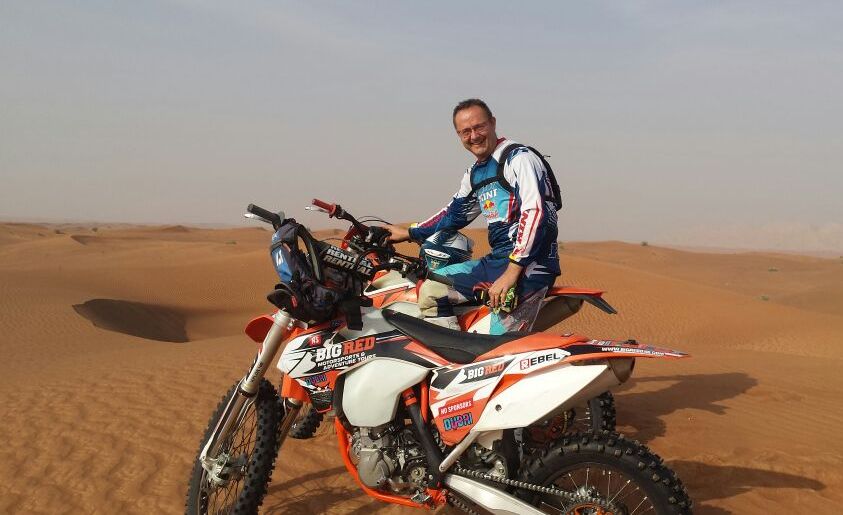 A few months ago I realised that it would make sense if I was to go out and get my motorcycle license. In Africa, sooner or later I was likely to want to rent or borrow a motorcycle, either to join a group of biking travelers for a day or two, or simply because there might be one I could borrow to nip into the nearest town or city. That’s got to be easier than driving a seven metre long truck into town, when all I want to pick up is some provisions, or a visa for example.

So I booked up for lessons at a school in Dubai near my office. Frankly the eight hours of ‘lectures’ I had to attend were truly awful, with training videos obviously stolen from both UK and Australian training schemes (so the vehicles were on the other side of the road to the way we drive in Dubai – very helpful if you are just learning!) one video taken from a UK comedy show (No, I am not joking) which was full of obscene, profane language from start to finish (it was supposed to highlight the dangers of driving when angry….go figure) , an instructor whose English was so poor I could barely understand him – despite the fact that this was the “lessons in English” class – and instructions for road use which were downright dangerous, stupid and just plain wrong!

Having taken the subsequent ‘Knowledge Test’ I was then entitled to learn to ride, and I’m sorry to say that with only very limited advice (ha!) from my instructors, I was a bit slow on the uptake. Specifically my clutch control just wasn’t very subtle – I guess 35 years of using my left foot to control the clutch had not left me with much finesse when it came to using my left hand instead. Still I eventually got the hang of it and passed the two handling skills test and the road test first time, so was finally able to add Motorcycle to my Light Vehicle and Heavy Truck licenses.

But I know that obtaining a license is NOT the same as learning to ride – it’s just the first step, so the first thing I did once I’d passed my test was to sign up for some off road riding lessons. My work as the official photographer to the Emirates Desert Championship means that I’d plenty of contacts with the MotoX riding community here, so I contacted Sam Smith of Big Red Motorsports and asked him for four hours of one to one instruction. You’ll see from the video just how I coped – the difference between my first few minutes of nervous riding, and my belting through rough tracks and the dunes just 90 minutes later, is clear to see.

My Thanks to Sam Smith, but also to my business partner Ian Barker for the loan of his Go Pro camera, and to Graeme Chart, my drumming tutor, who put together the great music track you’ll here on this, and all future videos I make for this page.