Based on a Mercedes 906 Sprinter cab and chassis built in January 2016, the modifications to make it a 6×6 chassis were carried out by Oberaigner at their Rostock facility. In addition to the 6×6, Oberaigner build 4×4 chassis,  in both short and long wheelbase configurations, single and double cab.

The Gross Vehicle Weight of my long wheelbase configuration is 7 tonnes. Since the chassis weighs just a little over 3 tonnes, this gives me almost a 4 tonne load carrying capacity.

My vehicle is fitted with the six speed manual gearbox. Unlike automatics, manual gearbox vehicles can be bump started, and have greater engine braking, so it was an easy choice. And anyway, I’m just old school like that….

The centre of the chassis is cut, an extension fitted, then the front wheels are converted to be driven, the existing rear axle located to the back of the vehicle and the ‘middle’ axle added.

The connection between the front sub-frame and the chassis is braced and strengthened.

The rear axles hang from a pivoting beam each side, suspension is coil spring all round for greater articulation, with some fairly impressive damping going on too!

A transfer case is installed. The vehicle is permanent six wheel drive, and features differential locks front to mid, and mid to rear axles, in addition to there being locks across all three axles too. The front differential lock is an option but I figured “If you’re going to be a bear, be a grizzly”.

Ground clearance below the diffs depends on the fuel and water levels plus load in the rear store, but can be assumed to be at least 256mm.

The turning circle is, unfortunately, quite large at 17.6 metres, due to the twin rear axle. My biceps are looking better already.

Whilst the finished chassis was at Hellgeth Engineering awaiting the delivery of the KrugXP cabin, I had Hellgeth carry out some additional work:

Two supplementary diesel tanks, approximately 45 and 55 litres, were installed. The former runs pretty much down the centre line of the chassis and the other to the right. The right hand tank sits just behind the exhaust outlet so a heat deflecting baffle was fitted.

These tanks empty into the main (100L) tank via a single pump and selectable left or right solenoid valve, operated from a switch installed on the base of the driver’s seat.

The lockable filler nozzle for these additional tanks nestles in the forward most upper corner of the rear wheel arch.

Hellgeth then designed and installed a set of machined steel blocks to fit within the rear chassis rails on each side of the vehicle. I have bolted into these blocks, one at the end of each chassis rail, a SAF Holland 13 tonne pintle hook, to be used for vehicle recovery. In order to minimise the torsional force on one side of the chassis or the other, these two hooks will always be used together, in conjunction with a four metre bridle rope. The rails are almost one metre apart and so the use of this length of bridle allows me to halve the load (roughly speaking three tonnes instead of six) applied down each rail.

Hellgeth also installed a front towing eye on the left side of the vehicle, again to be used for recovery and braced to the chassis. Since it is only on one side, and on the other side I can install only the factory spec. tie down eye (which is not designed for snatch recoveries) I must use this recovery point with caution and in emergencies only. 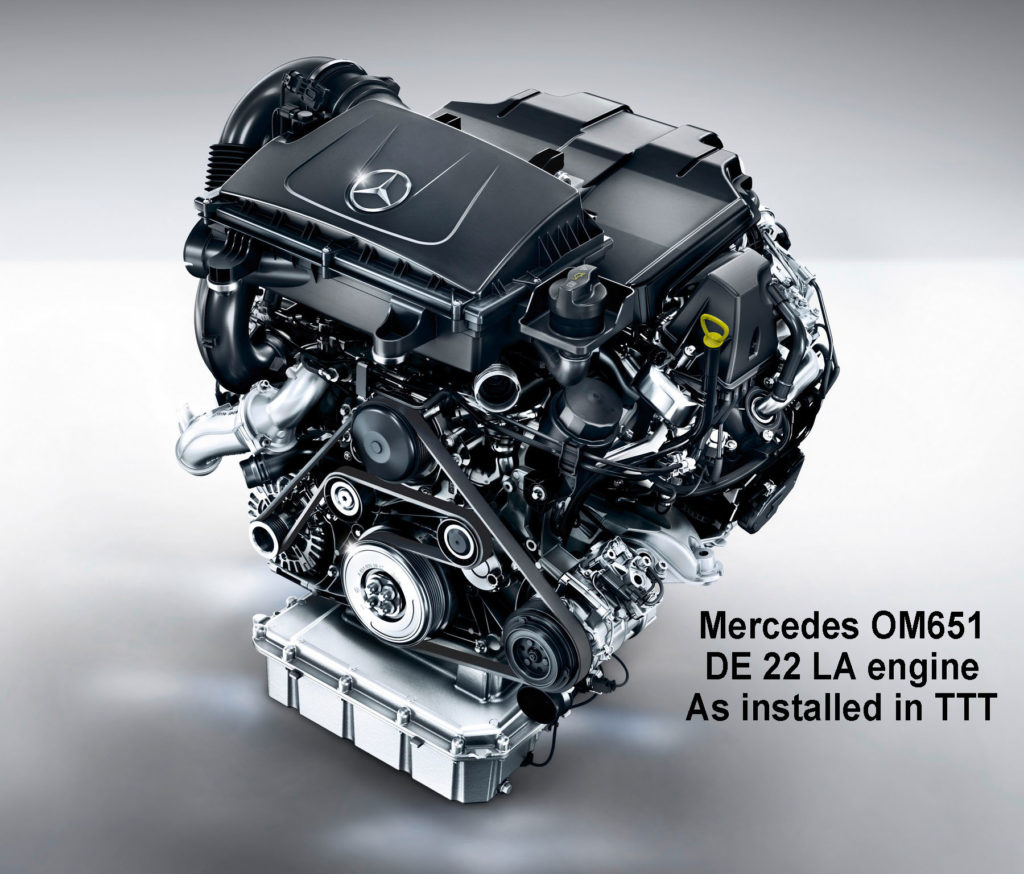 Although there was a more powerful V6 Euro 5 engine option available, the OM651 I have fitted is Euro 3 specification. That means there is no Diesel Particulate Filter or Exhaust Gas Regeneration system installed. I chose this option because African diesel is notoriously poor quality and some over-landers have experienced journey ending engine failures as a result of fuel issues damaging or destroying engines. Basically I chose fundamental reliability and simplicity over power. Time will tell if that choice was the right one.

Capacity is 2,143 cc, the four cylinder  engine features 16 valves, double overhead cams, and is fitted with a single turbocharger.

Torque produced in factory specification is 330Nm / 243 lbf-ft.  But watch this space…